A seven hour drive can easily turn into ten or eleven hours. You look at your first ETA on the gps and literally start laughing. You may even say “yea right” outloud if you are one of those people who talks to their electronics. We have also named our gps K.C. She is a liar who doesn’t know her way around a city at all.
Anyways…
You can’t predict when your kids are going to have to pee which is very often thanks to the size of their tiny bladders. Also ones in diapers will wait til you have been back on the road for five minutes before they poop. It is just the way things go. If you can wake up EARLY, that’s right I said it, and play with your kids they may sleep on the first leg. Then make a stop with lots of activity so they may take a second nap later. MAY being the key word.
We stopped at “south of the boarder” at the boarder of the carolinas.  It screams mid-centry entertainment with its arcades, ice cream shops and cheap little gift shops. No doubt the kids will like it because the streets and stores are littered with tons of colorful animals statues. We walked through a couple of stores and ended with ice cream. It was like a ghost town for the most part mid-day on a Tuesday. 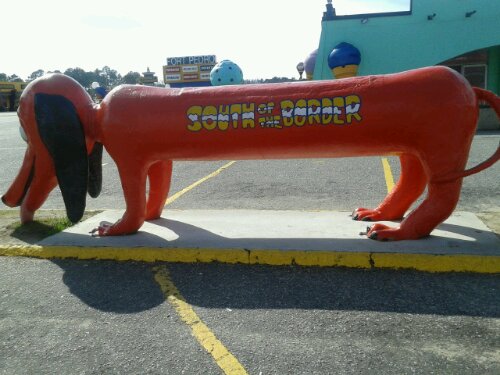