We had a little impromptu trip to Charleston.
Last minutes trips will teach you…
Kids need a lot of stuff,
Planning a little may help but takes away the adventure,
Kids don’t always like adventure if it means being strapped into a car seat.

None the less we had a blast maybe more so than we have on previous trips.

We are currently in Charleston on our way this morning to have some pre-deployment family photos taken. Since we had to change our scheduled photoshoot because hubby has to work tonight, we are now having to shoot bright and early. That of course means we needed to spend the night in Charleston.

Before checking into our hotel near the airport we hit Tanger Outlets to exchange some things and poke around until check in time.
From the hotel we used our phones map app to find a nearby gourmet burger place who also advertised a huge beer selection. We are suckers for burgers and for beers for that matter. The restaurant was fittingly named Sesame Burgers and Beers. 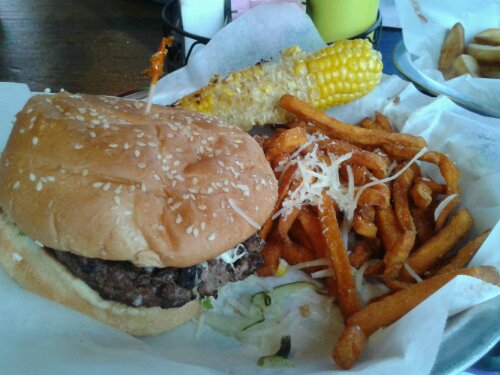 I had the napa valley with sweet potato fries. The burger had fig and bacon jam with blue cheese and a red wine reduction. Hubby made his own creation with carmelized onions, pepper jack, and barbaque sauce. We both had beef burgers of course. You have the option of having a black bean burger or turkey. The ketchup and mustard and other condiments are made in house and are quiet interesting if you’ve never had homemade ketchup.
Then we tried dessert. It was both interesting and fantastic. It was bread pudding made with bacon and cheyanne pepper topped with caremel and chocolate sauce and whipped cream too. It was sweet, gooey and warm. It had a saltiness that tamed the sweetness and a creeping spicey that was surprising and delightful.
After dessert  we took the kids to Monkey Joes. Since it rained our entire trip and hubs said no to the circus it was the best option. They offer play for everyone all day every day until 8pm. It was nice cause unlike other bounce house places they had arcade games to win tickets and get prizes. We played the stomp the spiders game. I love hearing my sons rolling giggle.

Will write about the photoshoot soon.