We have had our car going on three years. It’s an 08 we bought in California with 39,ooo miles on it in 2010. And it finally happened. 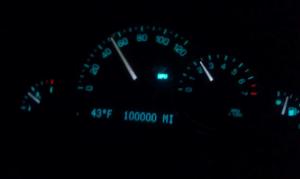 We were driving along I-95 on our way back from my husbands anniversary gift (I got him tickets to see The XX in Jacksonville, FL) I was asleep as it was after mid-night. All of a sudden I feel a patting on my leg, followed by “Babe, Babe, look its about to happen.”

“Uhhhh I can’t focus, can’t find the camera, must hurry, your driving too fast, must pull up camera app.”

It really is silly, but it’s not just a number. It’s kind of a symbol of all the places we’ve gone in this car so far. It makes us look forward to the next 100,000 miles, and since it was our anniversary, our next five years together.

This car has been across the country three times, to many national parks, landmarks, states and cities. It has carried us to terminals to say good bye to one another, and carried us home when we were reunited, it brought our daughter home from the hospital, and took my son to his first day of school. It’s transported my hoops everywhere, and his weight sets across state lines. The car may not mean anything to us because it’s just an object but the numbers represent something.

And if the numbers don’t, maybe the floor board does. Much like my past tolerance for the gas prices, the floor too, is wearing thin. Of all the numbers, that is the one I don’t want to calculate. 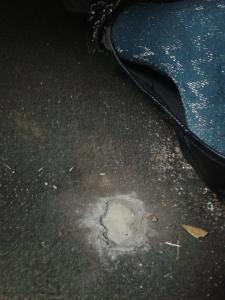