So with my husband starting training today and his briefing last Friday, I have came to learn that essentially Sunday will be his only likely off day. And by likely off, I mean not always. I am learning recruiting duty to be the home deployment, working over 12 hour days, 6 to 7 days a week. Bright side is that you aren’t trapped on a ship or in a desert! Oh and phone communication should be easy. There is no River City in recruiting.

So yesterday, I had read that it was going to be a likely 56 degrees and for Maryland and DC… this seems warm. We must get out!

For the past three weekends we have visited at least one Smithsonian museum. We started with a family favorite and basic the National Museum of Natural History, which really we have visited almost every time we have been in the area. Thankfully there are new exhibits often (and on Tuesday, the Butterfly exhibit is FREE) 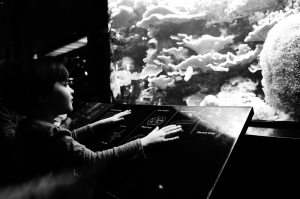 The next Museum we went to (last weekend when it was below freezing) was the National Museum of American History. The kids were so not into it. There aren’t too many interactive things for the kids, and well, with the whole floor on war, erhm…. well now we have to have some difficult conversations. Thankfully they are too young to understand.

Yesterday lead us to a museum neither of us have been to and has been my favorite so far. A friend I had met in SC, had told me the kids would probably love the National Museum of the American Indian, and while we have past it many times and admired the architecture, I am not sure the excuse for never exploring.

This is a four- floor museum. We started at the top. Fourth floor is a theater and very interactive hall with many little rooms dedicated to the many different types of American tribes. The third floor was all for the kids and kids-at-heart. Everything was interactive, you get these little passports so that you can stamp them after each activity. While the mini-est played with her dad me and the bigger went to get our passports stamped.

Museum of the American Indian

Museum of the American Indian

After the Museum of the American Indian, it was such a beautiful day, nearing 70 degrees that we walked over to the United States Botanic Garden.

Another intriguing building from the outside. When you step through the doors you are greeted by colorful blue painted branches in a very modern decor style. The first hall you enter is fragrant florals and sweet smells. Blue fountains are surrounded by pink flowers and citrus trees. There are strange plants from places afar, and a woman showing cacao and how chocolate is made. The next part we went into was the “jungle” hot and steamy, the multi-level room has misting systems going off on timers to keep the jungle environment warm and moist. We also entered the medicinal plants area which really just made me hungry because the smell of curry and celery married with various peppers to smell like some sort of Thai dish. We followed paths into rooms dedicated to desert plants, Hawaiian plants, and orchids. We ended our journey in an educational and interactive room which I believe is the “west gallery”. There are various metal sculpted flowers with different herbs and spices for you to smell and some to test your nose.

It was such a beautiful day we actually ended up running into our dinner guests from the previous night. It seemed everyone in the city and surrounding area was taking advantage of  the weather. I’m sure this coming weekend will be of cooler fate.

We know a lot of you are DC experts… which museum is next for us or maybe monuments?