those darn 52 recipes that “you’ll not be able to live without” or something click-batey like that.

So I vow to investigate five recipe from that list of 52.

So we have done chili many times, many ways.

When we lived in California, it started as veterinarian or vegan chili. Mostly because of a young child learning to eat.  Then my husband complained about it not having enough protein…. so we add ground turkey to that recipe.

Then once a week forever this dull recipe faded with picky kids who decided they only like white foods???? What is that?

This year my oldest kid LOVES tacos. Like we have them at least once a week.

So while I wish I had some cilantro or avacado…. something green on top, we garnished ours with corn chips, shredded cheese and sour cream.

It was pretty good. The recipe yielded an overflowing crock-pot (we have a smaller one I guess) So I ended up scooping a cup of the mixture out in the beginning.

Also the recipe calls for one cup of beer or beef broth, I chose to go with beer and used a Sam Adams Crystal Pale Ale. 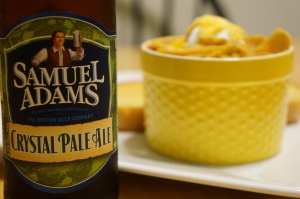 The beer also paired well because of all the acidity in the chili, it could cut through the hops and bring out the citrus notes.

Very well HuffPost… the family agrees… this is another win for you.